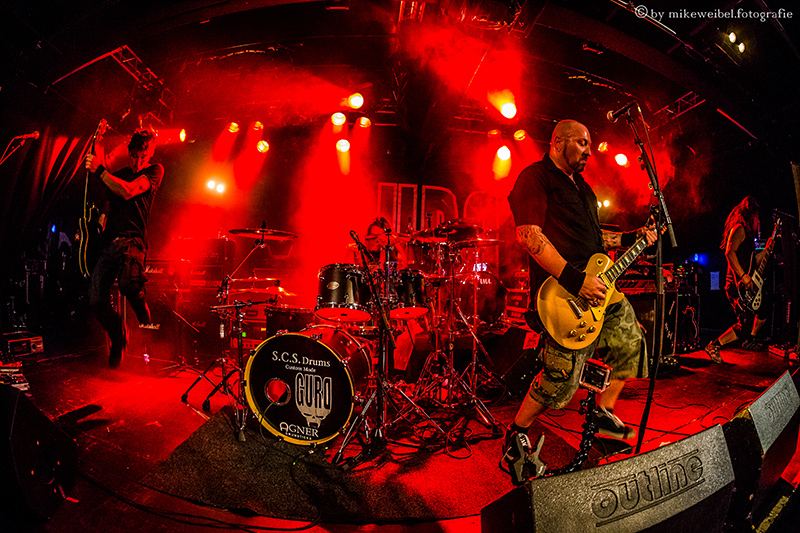 Gurd formed back in early 1994 out of the ashes of the Swiss power-thrash metal legend Poltergeist. Stylistically, Gurd decided to take a step into a rather different direction, as they preferred a more modern and crunchy sound to metal. Soon afterwards the company Major Records discovered the talented fourpiece and things easily started to work out for the self-titled debut album that got released in 1995 and which received awesome response from both media and the audience.

Hard touring and fast recording became two synonyms for the band. After their debut, their second output "Addicted" was also released in 1995, followed by tours with bands like Spudmonsters, Schweisser, Life Of Agony, Stuck Mojo, Pro-Pain or Such A Surge. The Dynamo Open-Air (1996) was definitely highlighting their history as they played in front of 20'000 wildly partying people. This amazing show led GurD to sign with Century Media. Until 1998, they released three more outputs ("D-Fect" plus "D-Fect - The Remixes" and "Down The Drain" at famous Thomas Skogsberg's Sunlight Studio in Stockholm). After touring Europe with Pro-Pain again, Marek, Tobi and Phil decided to quit the band at a quite successful moment, so that V.O. remained on his own. It did not take a long time until he joined forces with new members from Berne: Andrej (bass) and Spring (guit), who were formerly playing with the Swamp Terrorists, as well as Tschibu, exdrummer of the band Jerk. As all three members were jamming together for a while, they fastly formed a tight and suitable team to continue the GurD-way.

To steady their new built line up and performance, the four played several shows in Switzerland before they recorded the demo to the next album "Bedlam". It turned out to be the most powerful and heaviest material GurD ever wrote, more technical and thrash-oriented, yet also catchy as usual. The full-length album was released in august 2000. The year after was packed with clubshows in Switzerland and Germany, crowned by appearances at the famous With Full Force Festival and Metal Dayz in Switzerland. This successful time was sadly interrupted by the ending of the deal with Century Media. In consequence, GurD recorded a new demo, along with a video-clip to the track "Rule The Pit", which was produced by the wicked Evilproduction-stuntteam from Berne. Sad enough, Andrej had to leave the band at the end of the year due to health problems.

The year started with welcoming Franky on bass, who helped to cope with that setback. As he was GurD's former live engineer, they knew each other well and he became a fully accepted bandmember very fast. He could prove his live qualities during many shows in Switzerland, the Summerbreeze Open Air and several benefit-festivals like the Fuck The Flut or In Union We Stand (both Germany).2003

Signing a deal with Diehard Music was a good start for this year. As V.O. and Franky built their own studio Little Creek, their next album "Encounter" was one of the first records produced there. Soundwise, they followed their way to more thrashbased and old-schooly music, yet not to miss a very modern influence (if Jeff Waters says so, it can't be wrong!). In June, GurD went on a small tour with I-Trip, new-metal hopefuls from Stuttgart, continued playing in Switzerland and amazingly performed at the Metal Dayz in Switzerland again; the place was packed, all sweaty and partying! With that show, GurD proved that they are still alive and kicking and they survived all those awkward circumstances in the past like a phoenix!2004

This was year 10 after forming GurD. To celebrate the "Decade of GurD" appropriately, the band was playing an anniversary show in Switzerland which was recorded and filmed and should be released the following year. GurD-Booking is now represented by Dragon Productions/All Access. GurD is surely a good choice, still bringing bloodrushing intensity and heavy spirit to every stage! At the end of the year, Spring decided to leave the Band & concentrate on his own project 'The Order'.

The year started with integrating new guitarist Pat into the band. A few shows later, GurD was back on track & stronger than ever. After the release of the Deluxe-Packaged DVD/CD '10 Years of Addiction' through N-Gage Records, GurD focused on recording new Killer Material & playing as many shows as possible.2006

The new album is finished & GurD has signed a worldwide record deal with German based label Dockyard 1. The release date for the new Masterpiece called 'BANG!' is set to 31st of July. Also several shows are made & the band rocked the METAL DAYZ festival in Switzerland.2007

This Year the Band is ready to hit the road again! In April/May they toured through Europe together with their long-time-buddies PRO PAIN. GurD also made a Video-Clip for their anthem ‘BANG!’

Besides many club shows and open airs, GurD worked on a new studio album entitled 'Your DruG Of Choice' which was finished in October. Guest appearances from befriended musicians like Schmier (Destruction), Freddy Rotter (Zatokrev), Mark Elliott (The Force) and Tommy B. (Ex GurD, now Undergod) helped to make their ninth album sounding fresh and diversified like never before.2009

‘Your Drug Of Choice’ was released worldwide in January through LC Records. To the new album the band has hit the streets again for another europen tour with their new yorks hardcore buddys of Pro-Pain. The year also marked the 15th Anniversary for GurD. A big birthday party took place in the Z7 in CH-Pratteln. Fans from all over Europe joined the celebration. At the end of the year drummer tchibo has decided to leave the band after ten years for familiary reasons. Besides his combo The Order he’s furthermore making music with some GurD members as new drummer of the band Pulver.

Steve Karrer (Mirto Masaker, ex Messiha, ex Aka Profound, ex Pulver) joined the band as new drummer. After a few shows the band was back on the track and started writing new songs. It soon turned out that with the new drummer the songs was getting more into thrash metal and much faster.

At the beginning of the year the recordings for the ‚Never Fail’ started at the Little Creek Studio. By far the fastest piece GurD has ever recorded. A devastating thrash-grenade with which was quickly found a new record company as a partner. ‘Never Fail’ will be released via NoiseArt Records at 28th, October 2011. With Rock the Nation also a new booking agency was found which starts an extensive European tour, Neckbreakers Ball IV on time to the release of the new record.

Besides many concerts GurD was part of the Metal-Fest Tour. Followed by further shows and support gigs with bands like Testament, Prong, Soulfly, Coroner.

The year of the 20th anniversary! The new neck breaking record ‚Fake’ is going to be released in Switzerland by LC-Records and a big anniversary show with exlusive appearances of ex-bandmembers on stage is planned for December 5th.

Czar Of Bullets is very proud to take care of their international release. 'Fake' will hit the stores outside of Switzerland in january. More news to be announced soon...