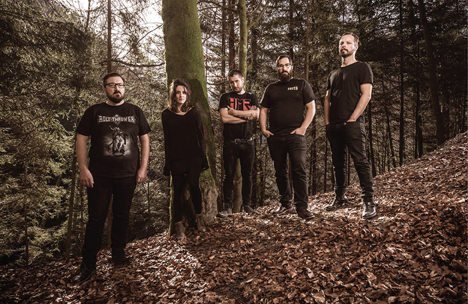 UNHOLD are influenced by various kinds of heavy rock music - metal and noiserock, hardcore. Not to be easily stuck in just one section, UNHOLD is a multi-headed beast with both feet dug into the ground and the head surrounded by blizzards. Set to merge beauty and beast into one single hybrid creature - fierce, intimidating, beautiful and compelling. UNHOLD early on forged the term «Alpine Distortion», which still to date embodies their own consolidation of sludgy athmospheric metal. In order to achieve more depth and density UNHOLD had its ears and eyes open for opportunities to complement their sound and move forward, thus incorporating new members to the band - Miriam Wolf on piano and vocals and Leo Matkovic on bass. Leo was allready involved doing visuals on the «Gold Cut» tour 2008/’09, Miriam brings artistic vision and experience gathered in Bands such as Crippled Black Phoenix and My Wolf.

Existence fosters the urge for room and sonic space, perpetual and sweat bearing devotion. It draws from cumulated forces and visionariness. Eyes fixed on the scenery it stands beside the ongoing commotion. Therein lies the necessity to deliver oneself to the frail, to detect and embrace one’s own fragility. Never accustomed to dwell in shelter for too long. This is where the fourth studio-album «Towering» mountainously plunges down towards the spectator. A stubborn and imposing body of songs is rigged up, taking its stance clear and unapologetic. A colossus, preconceived and without debate. Unhold, bearing the malice spirit in its name, is in motion and displays itself in most flattering twilight, revealing a female side reformed in a new constitution. Sound and course remain unaltered, forging ahead. Taking roots was never intended. Aware of perishability, from the depths Unhold gather and unleash a new storm. Pushing through calm waters they’ll let the high tides rise even higher.