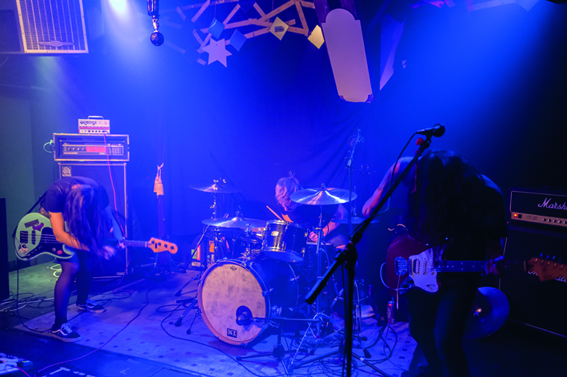 Muerte Espiral is an intercontinental music project founded in early 2017 by the songwriters Jurel Sónico (Vox & Guitars / Adelaide / Chile) and Mia Moustache (Bass & Guitars / Zeal & Ardor / Ex-Slag In Cullet / Switzerland). Musically they move in the basin of Stoner, Grunge and Doom, but also psychedelic parts find their ways into their musical hemisphere. The first sonic landmark was a four-track EP called "Invocación", which was recorded by Jurel Sonico in February 2017 at "HISS" Homestudio in Valparaíso Chile and which was released independent on Tape and Bandcamp. Since the beginning of 2018 they are part of the Czar of Crickets family and from now on you can listen to it through all its platforms and networks as Spotify or iTunes.
The band is performing live in South America as well as in Europe. They are working with different drummers depending on the continent. These are David Burger (Neo Noire / Ex-Slag In Cullet / Switzerland) and Pedro Ogrodnik (Vorágine / Chile).
In summer 2017 Muerte Espiral recorded their debut album in Switzerland at the Blue Shelter Studio with the producer Marc Obrist (Rich Kid Blue / Zeal & Ardor), which will be released in 2018.
Live you can expect angry, energetic guitars and booming low notes, which alternate with catchy melodies that are perfectly rounded off by Sónico's skilful use between singing and screaming. Try out this experience, crank it out loud and bang your heads. Fuzz knows no distance.
Bandcamp
Facebook